skip to main | skip to sidebar

Since I promised myself I would plant peas this year, come snow or hail, I began by looking online and asking everyone who gardens when I needed to get them in the ground. No matter where I turned, I got the same response...."as soon as you can work the soil". Well, I could work my soil as early as January, thanks to my raised boxes and the awesome growing mix that I use for my veggies (I will share more about Square Foot Gardening, for those of you who haven't heard of this technique, in another post). Patiently I waited until I had a few sunny days and most of the snow was gone from my beds to really get excited about putting them in the ground.

For this year's peas, I chose the Sugar Sprint Pea . It is a variety that is supposed to do well with an early start, is an heirloom (which means I can harvest seeds to use for future crops if I so feel the urge), and it is completely edible (what a treat!). I began planning all sorts of wonderful destinations for my little pod buddies. 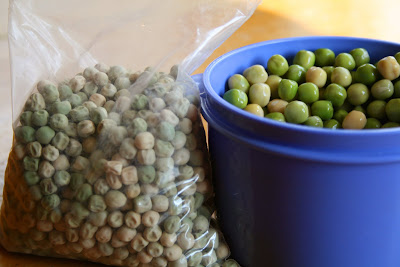 I put the seeds in some water to soak overnight, all 250 or so peas. I was determined to get an awesome yield this year! They were so plump and beautiful after the nightlong soak, Strider asked if he could try one.....and, being the awesome mom that I am, I let him....then I had to try one as well....just to say I had (the peer pressure was horrible). And they weren't half bad....other than being completely tasteless...I guess that is why the birds are out there scavenging them when they can. 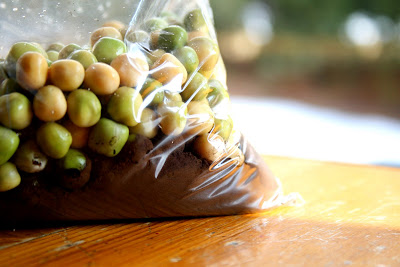 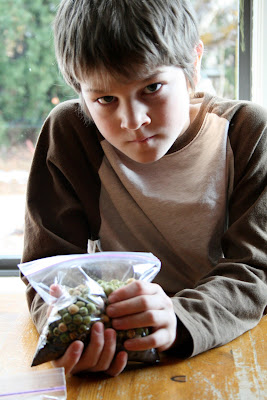 Strider was seriously serious about his job as the pea inoculating shaker...so serious...and that table seriously needs to be sanded and refinished...maybe this year, even. 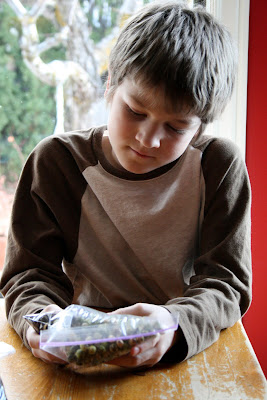 He seriously enjoyed the experience...don't let the bored look fool you. He's really contemplating the universe and the role that the pea plays in the grand scheme of things. 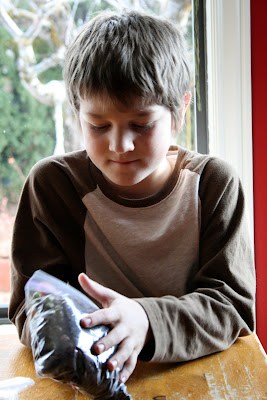 He didn't realize it could be so much fun to roll a bunch of swollen peas around in some brown dust...we should all have more pea planting parties. 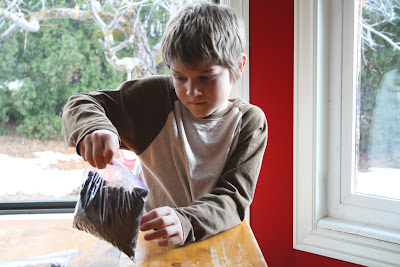 When he was done, Strider kept commenting about how they looked like little bunny pellets. I thought they looked like mini truffles. Needless to say, there would be no more tasting of the seeds after they took on their nitrogen fixing dust. 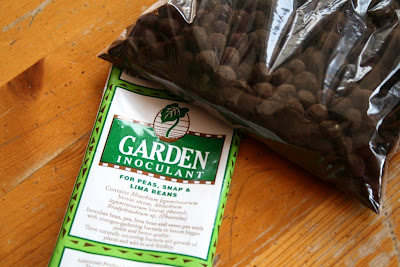 This is the inoculant that we used....and the only reason I used it all up was because the expiration date is December of this year. There was enough in there that I could have easily used it for all 500 or so peas, but I felt like 500 peas may be going a little bit overboard. 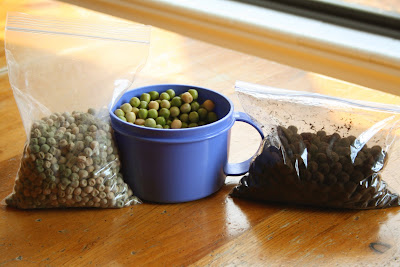 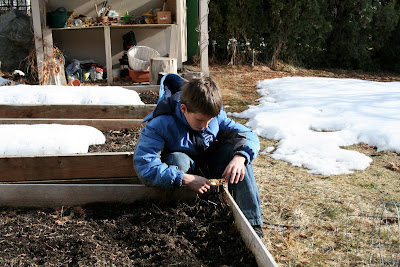 I worked the soil with Shooter and Strider, which was very easy to do, only because the soil in these boxes ROCKS the soil world! After about 20 minutes of working the soil (with our hands, not a tiller, hoe, or a shovel), we were ready to begin planting. We all made holes in the grow boxes for the peas...we put the peas in, one by one....until the boxes were full (my hands were a little too dirty and cold at this point to actually get any pictures of the process, but you get the picture, right?). 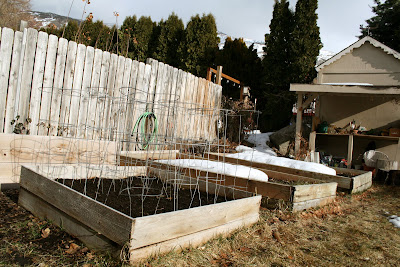 I put the tomato cages in for future support, in the hopes that they would somehow coax the little sprouts out of their long winter's sleep. 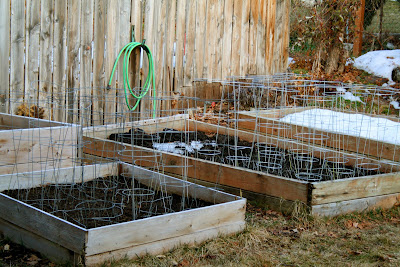 The little prongs you can barely see poking up out of the soil....they're my own little crazy invention. You see, I have cats in my neighborhood. I created these little cat deterrents so I don't end up with my beds dug up and kitty nuggets instead of peas. I definitely love my neighbors more than I love gardening. I even love their cats. Hey, they can't help it if my garden appears to be a huge grouping of litter boxes laid out just for them. 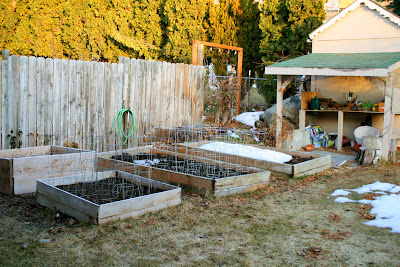 The best part? Since the soil was already moist, I didn't worry about watering after I planted them...and hopefully I won't need to worry until March... 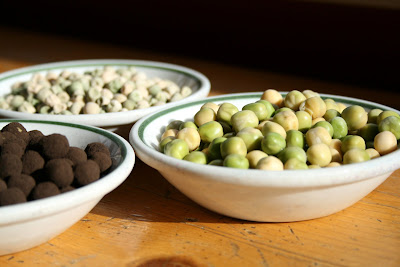 I'll let you know if it was indeed worth getting them in so much earlier. And before they are ready to harvest, I hope to have lots of yummy recipes and techniques for preserving peas.